Each year we accept a group of dynamic, diverse, and bright high school students into our national recognized mentor-ship program.  Their passion always amazes us, as does their determination to learn as much as they can in the short time they serve on the Junior Commission.

At the beginning of each term, Junior Commissioners choose topics related to women and girls which they are passionate and proceed to build a community service project around that topic or issue. Here are brief snapshots of what these future leaders have accomplished during the course of their term on the Junior Commission.

According to some estimates, approximately 80% of trafficking involves sexual exploitation, and 19% involves labor exploitation. According to the U.S. State Department, 600,000 to 800,000 people are trafficked across international borders every year, of which 80% are female, and half are children. In Sonoma County, since 2011, over 160 human trafficking and prostitution cases have been filed by the District Attorney’s Office.

Members of this project conducted middle school classroom presentations on the devastation of relationship violence, how to spot victims, and how to find help. Posters with signs and resources were created for school classrooms.

Unrealistic and unhealthy images of women are rampant in marketing products. Real life women and girls are compared to these “idealized” images and judged harshly by others and themselves. Body image is closely linked to self-esteem. Approximately 91% of women and girls are unhappy with their bodies and resort to dieting to achieve their ideal body shape – an ideal defined by society. According to a study by Bradley Hospital, adolescents with negative body image concerns are more likely to be depressed, anxious, and suicidal.

Members of this project created a four-episode podcast on body positivity: the issue, its prevalence, a few of their own stories and experiences, and where listeners can find support and resources.

Empowering women to participate fully in economic life across all sectors is essential to build stronger economies, achieve internationally agreed upon goals for development and sustainability, and improve the quality of life for women, men, families and communities.

Members of this project created a Facebook page called Women of Sonoma County in the style of Humans of New York where they interviewed women and created profiles to empower women and girls. They also created a short documentary film by interviewing their fellow high school classmates. Five teenage girls share their inspirations, dreams, fears, challenges and accomplishments in an exploration of independence, authenticity, self-love, and empowerment. In addition, they began the Women of Sonoma County: Legacy Project - Interviewed Molly MacGregor, former member of the Commission on the Status of Women of Sonoma County and founder of Women’s History Week, an effort that eventually became National Women’s History Month.

At the beginning of the 2015-2016 Junior Commissioner Project term, Junior Commissioners chose four topics they were passionate about to base their community service project on. Each project committee combined research with community interaction and produced some incredible and impressive results.

Body Positivity
As a result of several sources of influence, there is a growing cultural emphasis on aesthetics that can significantly damage the self-esteem of young girls and cause them anxiety and a negative self-awareness of their bodies that can become the basis of a life-long pattern of destructive behavior. Junior Commissioners on this project worked to build self-acceptance and confidence in girls of late elementary school and middle school age in the hope of shutting down these negative thoughts prior to their manifestation. The result was a Girl Scout Badge Workshop that encouraged young girls to think critically about how media and other sources enforce negativity and self-consciousness, and taught them skills to recognize and combat this influence when they encounter it. The workshop activities included the creation of "compliment bags," whereupon scouts wrote complimentary messages to their peers and placed them in their bags. 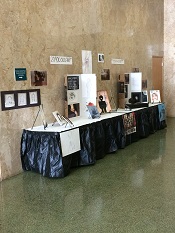 Members of this project committee created an educational and interactive exhibit that showed their high school peers that human trafficking is the fastest growing crime around the world and is very present in our own community. Following a presentation by the Junior Commissioners, students in art classes at Windsor High School were ask to create forms of artwork that reflected what this modern-day form of slavery meant to them, and the feelings the topic elicited. The artwork revealed some stark messages about the scourge that is stealing our youth.

The exhibit will be on display outside the Chambers of the Board of Supervisors at 575 Administration Avenue, Santa Rosa, the week of May 23, 2016.

Sonoma County Girls in Code
SoCode, short for Sonoma County Girls in Code, is a project aimed at addressing the lack of exposure and fear girls may face when confronted with science, technology, engineering, arts, and mathematics (STEAM) subjects. SoCode wants to provide exposure and knowledge about specific services and events available within the surrounding area to women and girls of all ages. This project is a continuation from the 2014-2015 term and this year saw more engineering and programming workshops for girls held at the Chimera Makerspace in Sebastopol; participation in hack-a-thons; and the creation of a website providing resources for women and girls in Sonoma County. Additionally, Juniors worked to “Close the Age Gap” in technology literacy by providing senior citizens with the basics of setting up email, Facebook, and Skype accounts to stay in contact with family and friends.

Women's Imaging
Schools around the nation enforce strict disciplinary actions against dress code violations by students. Many students feel that while some of these rules are reasonable, a vast majority are unnecessary and unfairly restrict what girls wear. This project started out with efforts to address this issue by asking girls at Sonoma Academy, Rancho Cotate High School, and Windsor High School what their feelings were on the subject. Upon realizing feelings about the issue reached beyond the female gender, the question was changed to be more encompassing: “In what ways do you feel as if your gender is being commercialized, or forced to fit the social mold of stereotypes?” Most of the dozens of responses reflected the feeling of being victimized and viewed as an object and not as a person. A photo exhibit was created to show how current rules can negatively impact how the different genders feel society views them, with each of the participants being photographed while adding handwritten signs with their answers.

The exhibit will also be on display outside the Chambers of the Board of Supervisors at 575 Administration Avenue, Santa Rosa, the week of May 23, 2016.

Commissioners guided sixteen high school-aged students in learning about the Commission, issues affecting women and girls, and relevant legislation and local government, in an effort to better prepare them for leadership roles in their communities.

During the course of their term, the Junior Commissioners worked on individual or small group projects, gathering information regarding specific issues relevant to them. They compiled the information and created powerful written presentations that they brought before State Legislators, the Sonoma County Board of Supervisors, and members of the community.

The subjects of these projects ranged from how the definition of rape in the minds of teenagers has changed (or not) over the years to whether teens felt influenced by society’s opinions regarding gender roles.