Demographic Overview
Sonoma County is a large, urban-rural county encompassing 1,575 square miles. The county’s total population is currently estimated at 487,011. According to projections from the California Department of Finance, county population is projected to grow by 8.3% to 546,204 in 2020. This rate of growth is less than that projected for California as a whole (10.1%).

Geographic Distribution of Population
Sonoma County residents inhabit nine cities and a large unincorporated area, including many geographically isolated communities. The majority of the county’s population resides within its cities, the largest of which are clustered along the Highway 101 corridor. Santa Rosa is the largest city with a population of 168,841 and is the service hub for the entire county and the location of the county’s three major hospitals. 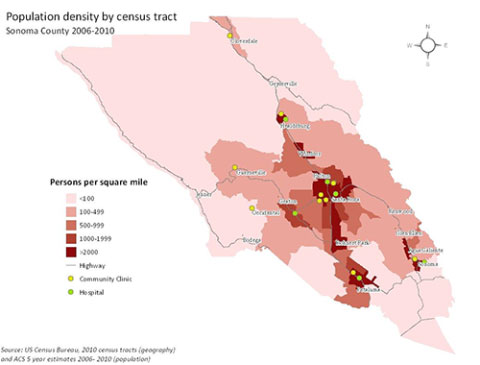 Since 2006, the county population has grown at an overall rate of 1.8% with the cities of Sonoma, Santa Rosa and Windsor experiencing the fastest growth rates.

Sonoma County’s unincorporated areas are home to 146,739 residents, 30.1% of the total population. A significant number of these individuals live in locations that are very rural and geographically remote. Residents of these areas may experience social isolation and significant barriers in accessing basic services and supports such as transportation, health care, nutritious food and opportunities to socialize. Low-income and senior populations living in remote areas may face special challenges in maintaining health and quality of life. Of the county’s total senior population, age 60 and older, 12,144 (12%) are considered “geographically isolated” as defined by the Older Americans Act. (Source: California Dept. of Aging, California Aging Population Demographic Projections for Intrastate Funding Formula (2011).

White, Non-Hispanics currently represent 64.2% of the county’s population while Hispanics account for 25.6%. Other ethnic groups include: Asian/Pacific Islander (5.2%), African Americans (1.7%), American Indians (1.0%), and persons reporting two or more races (2.3%). While the county’s population is less diverse than that of California as a whole, this is changing. By 2020, Sonoma’s Hispanic population, currently estimated at 129,057, is expected to grow to 168,290 and account for 31% of the total population. Other ethnic groups are projected to experience less dramatic growth.
Source:California Department. of Finance.

While the majority of the county’s ethnic populations are English-proficient, the 2010 Census estimates that 50,236 residents, age 5 and older, or 11.26% of total population, are “linguistically isolated” i.e., speaking a language other than English at home and speaking English less than “very well.”

Source:California Dept. of Finance, E-5 Population and Housing Estimates for Cities, Counties, and the State (2011 - 2012)

Seniors are the county’s fastest growing population age group. This population is projected to grow from 102,639 in 2012 to 128,589 in 2020, with the greatest growth in the 70-74 age group the baby boom “age wave”. This age wave, combined with increased longevity, will continue to drive growth in senior populations, especially in the 75 and over age group. Seniors age 75 and over currently represent about 9% of the total population at 44,813. Females significantly outnumber males in this age group (62%/38%).

Educational attainment rates in Sonoma County exceed national averages. Levels of attainment, a key determinant of both income and health, vary modestly by gender but significantly by ethnicity, with Hispanics currently lagging behind their White counterparts in attainment at all levels. Just over 6% of Whites do not have a high school diploma as compared with 45.9% of the Hispanic population.

Educational Attainment by Gender and Race/Ethnicity for Population 25 years and older, Sonoma County

Employment in the county has decreased by 10.3% since the fourth quarter of 2008. The Sonoma County Economic Development Board estimates that, between 2007 and 2011, over 22,000 jobs have been lost in the recession. According to the State Employment Development Department, Sonoma County’s unemployment rate in September 2012 was 7.6%, below the California average (10.2%).

From 2006-2010, the median income of Sonoma County’s 184,000 households was $63,274, slightly higher than the California average. During this period, 17.7% of Sonoma County households had incomes of less than $25,000. At the upper end of the scale, 28% of households earned over $100,000 annually. The impact of the recession on income and wealth has been significant. While local data are not available, a national survey of consumer finance showed that, between 2007 and 2010, the median net worth of American families plunged more than 38 %.

Source: Board of Governors of the Federal Reserve System, Survey of Consumer Finances (2010).

While many Sonoma County residents enjoy financial security, 10.27% of county residents reported annual incomes below Federal Poverty Level in 2010. The 2010 Federal Poverty Level (FPL) was $10,830 in annual income for an individual or $22,050 for a family of four. The Federal Poverty Guidelines are not scaled to reflect significant regional variations in the cost of living. Given the high cost of living in Sonoma County, it is generally accepted that an annual income under 200% of FPL ($21,660 for an individual) is inadequate to meet basic needs for food, clothing, shelter, transportation, health care and other necessities.

Poverty rates vary significantly by ethnicity. Significant disparities exist, especially for Sonoma County Hispanics, who experience a much higher rate of poverty (21.8%) than Whites or Asians.

Percent of Households
Below 100% Poverty Level 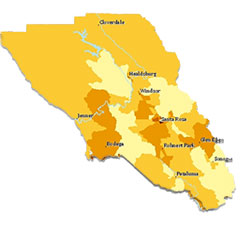 Percent of Households
Below 200% Poverty Level 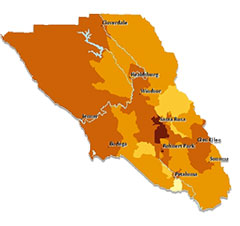 In some parts of Southwest Santa Rosa, the Russian River corridor, Sonoma Valley and unincorporated areas in the northwest and northeast, poverty rates for children under age 18 exceed 40%. Based on neighborhood conditions, residents in these communities may have limited access to safe places to play, safe routes to walk and bike to school, grocery stores that offer affordable, fresh fruits and vegetables or prevention-focused health and dental services.

The county’s lowest income senior populations are clustered around Santa Rosa, the Sonoma Valley and the Russian River. Similarly, low-income seniors may face barriers in accessing affordable transportation, nutritious food, safe places to exercise and opportunities to socialize with others.

Approximately 10% of Sonoma County residents (50,670) live alone. Among seniors aged 65 and older, 30% live alone, representing 38.4% of the women and 18.9% of the men in this age group. While data on residency in institutional settings is not available, Sonoma County skilled nursing facilities are currently licensed for 1,684 beds; residential care and assisted living facilities are licensed for 3,052 beds. The 2011 Homeless Census and Survey counted 4,539 individuals as homeless in Sonoma County.

Food security is commonly defined as including both physical and economic access to food that meets people's dietary needs as well as their food preferences. Data from the 2009 California Health Interview Survey indicate that an estimated 51,000 Sonoma County adults (50.5%) with incomes 200% or less of FPL were not able to afford enough food (food insecure).

In 2010, the Redwood Empire Food Bank (REFB) reported that the number of food insecure people in the county was continuing to grow as evidenced by a 20% increase in the number of people seeking emergency food assistance in each of the preceding two years. REFB reports that 61% of its food recipients live at or below the federal poverty level.

In addition to the Redwood Empire Food Bank and its network of food pantries, a number of food assistance and charitable feeding programs focus on alleviating hunger and food insecurity for both adults and children. These programs include the federal food stamp program (CalFresh in California), the National School Lunch and School Breakfast Program, the special supplemental program for Women, Infants and Children (WIC), and various nutrition and meal programs for low income seniors. However, enrollment in these programs is consistently lower than necessary to ensure community-wide food security for children and families. For example, an estimated 54,165 Sonoma County residents were eligible for the Cal Fresh Program (formerly the Food Stamp Program) in 2010. A majority of these (63%) were not enrolled. The 2010 Sonoma County Nutrition Profile reports that 12% of the 21,362 eligible children did not enroll in the National School Lunch Program. As of June 2012, 27,686 children were eligible for free and reduced priced meals through this program, approximately 40% of all children enrolled in Sonoma County public schools. Data on the number of children participating in 2012 is not yet available. Similarly, in 2012, while 2,251 low-income pregnant women were eligible for food assistance through the Sonoma County Women, Infants and Children (WIC) Program, nearly 20% did not enroll.

Sonoma County residents obtain health insurance through a variety of public and private plans. Of those who have some type of health insurance, approximately 68% are covered through private insurance plans while another 32% are covered through publicly funded programs such as Medi-Cal and Medicare. The majority of private plan enrollees obtain coverage through employer-sponsored programs. As has occurred nationally, the recession has forced many local employers to reduce workforce size and/or to scale back or discontinue the provision of health insurance benefits to employees.

According to estimates compiled by the Sonoma County Department of Health Services, approximately 70,000 individuals (14% of total population) are currently uninsured for health care. Some individuals who have health care coverage are considered “underinsured”. This means they lack access to basic health care services such as dental, mental health or specialty care because their insurance does not cover needed services or does not pay at a level that local providers will accept. Estimates of this population are not available.

Passage of the Affordable Care Act (ACA) will have significant positive impact on un and underinsured populations in Sonoma County, increasing coverage in both private and public plans, as projected in the table below. Based on these projections, the ACA will reduce the number of uninsured in Sonoma County from 70,000 to 20,000 individuals and expand Medi-Cal by approximately 30,000 new enrollees.

Health Insurance before and after reform, Sonoma County

;
I Want To
Close Menu