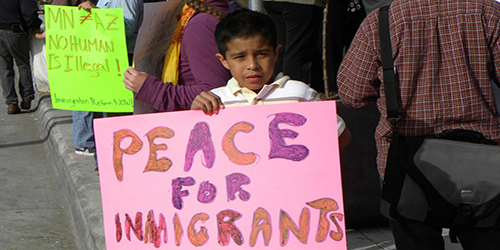 The Child Deportation Defense Program is pro-bono legal services program run by the County Counsel’s Office that provides representation to children who have fled violent conditions in their home countries and have been detained at the U.S. border and placed in deportation proceedings. The number of these children detained by the Department of Homeland Security has increased from an average of 6,500 per year prior to 2011 to 60,000 in 2016. Although mostly teenage boys in 2011, the number of girls, including pregnant and parenting teens, and younger children has steadily increased.

National statistics show that while a majority of these children likely had a legal basis to stay in the U.S., without an attorney 90% were deported to face abuse and possible death in their country of origin.

The Board first approved the County program in late 2014 and recently renewed its obligation to assist these unaccompanied children. Donated training for the program has been provided by the Immigrant Legal Resource Center and volunteer mentor immigration attorneys have been recruited from the community.

To date, 7 Sonoma County children have been served, 4 have been granted legal status, 2 found private counsel through a parent, and 1 is in process. The Project has been honored with awards from the National Association of Counties (NACo) and the California State Association of Counties (CSAC) and has served as the model for similar programs in Santa Clara County and the Los Angeles Unified School District.